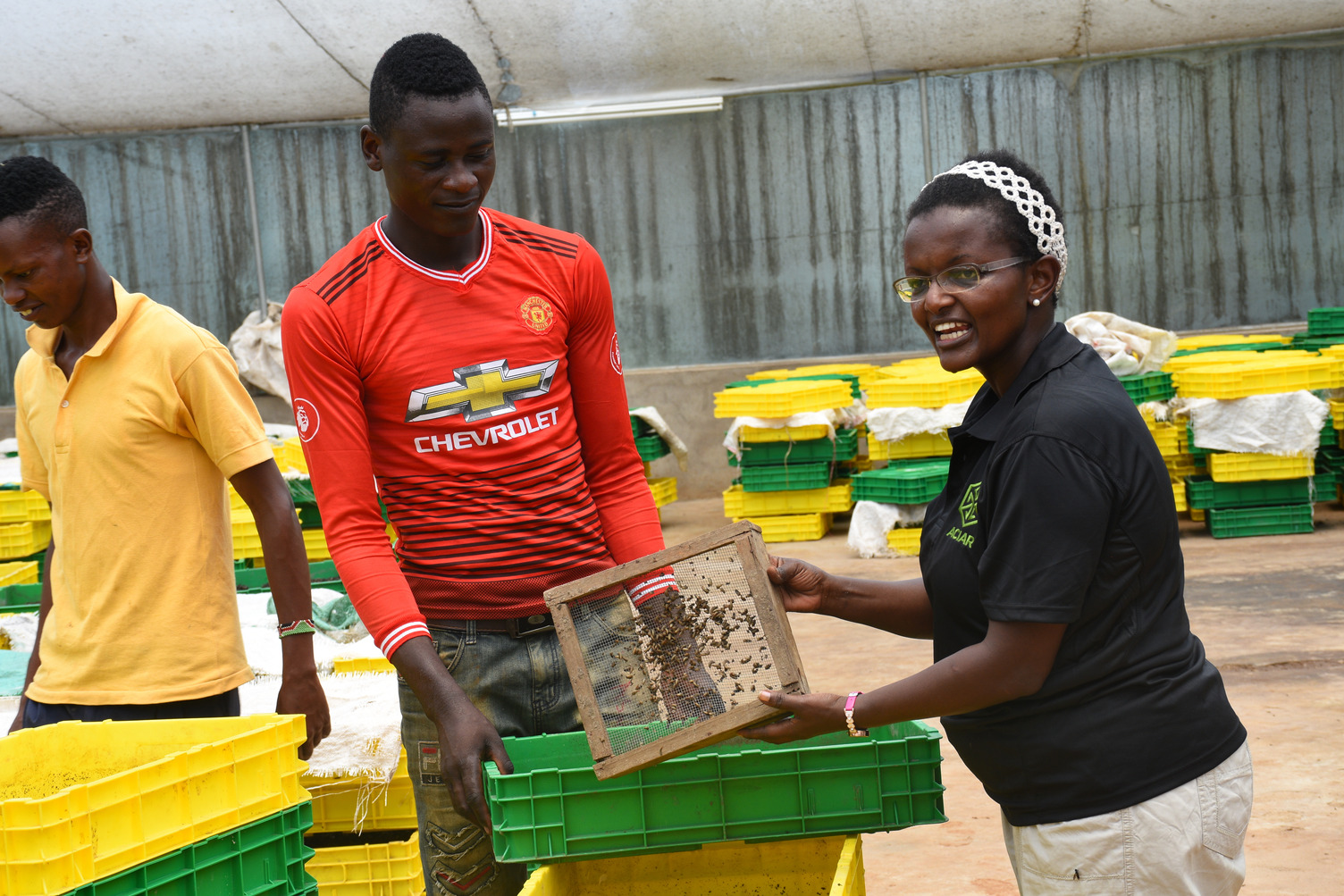 Lack of access to affordable protein sources for farmed pigs, chickens and fish in Kenya can deter women and youth farmers from starting a small livestock venture, with both groups less likely to have access to the required capital. Yet, their involvement in agriculture is widely recognised as critical to Kenya’s economic development.

Traditionally, Kenyan farmers use fishmeal and soybean as protein sources for their animals, but both can be problematic for smallholder communities. Kenya does not produce high quantities of soybean, and limited local supply translates to expensive import taxes, which often push the commodity out of the reach of small-scale operations. Likewise, fishmeal is becoming a less reliable protein source due to greater market competition, overfishing and traders often adulterating supplies with sand to increase profit margins.

The development of the models has stemmed from the Insect feed for poultry, fish and pig production in sub-Saharan Africa (INSFEED) project, one of nine projects under Cultivate Africa’s Future Fund, a joint initiative of ACIAR and Canada’s International Development Research Centre.

Black soldier flies provide the opportunity for smallholder farmers to shift towards a more reliable, profitable and ultimately more sustainable source of protein for their animals.

When Ms Roseanne Mwangi first started her pig venture in Makuyu, Kenya, she relied on locally made fishmeal and soybean feeds but quickly realised the cost far outweighed potential returns.

While attending a conference in 2018, Ms Mwangi visited a research farm in Uganda where she learnt how to derive chicken feed from housefly larvae feeding on pig manure. Further research led her to farm black soldier flies, and she approached the International Centre of Insect Physiology and Ecology (icipe), the INSFEED project implementer, for more information.

Black soldier flies are renowned as being one of the most efficient waste recyclers of the insect world. Unlike common houseflies, black soldier flies don’t have mouths and are incapable of transmitting deadly diseases, posing minimal risk to human or animal health.

Adult black soldier flies have one goal—to lay eggs. The resulting larvae can devour a wide range of food scraps and waste materials, quickly converting leftovers into protein. From hatching, black soldier fly larvae only take 10-14 days to grow fully. At this adult stage, the larvae are fed to animals, providing a protein-rich food source for livestock.

By May 2019, Ms Mwangi started producing black soldier flies. Together with her five workers, Ms Mwangi uses potato peel waste as a substrate (sourced from her sisters’ business venture) to grow the flies. They currently produce an average of 500 kg of black soldier flies larvae every week, fed directly to her chickens and pigs. The high-protein black soldier fly increases the chicken’s growth rate and the amount of good, lean meat they produce.

‘Within two months, our chickens weigh 800 gms more and appear huge compared to layers and broilers in the market,’ says Ms Mwangi.

One chicken at live weight fetches 900 Kenyan Shillings (Kshs) (A$13.6) and 600Kshs (A$9.1) cold dressed. At the time of the interview with Ms Mwangi, she had sold 300 chickens and was seeking to produce an additional batch of 500 birds.

‘When feeding the pigs with black soldier flies, we have noticed that the pigs get to marketable size one and a half to two months earlier, which in turn reduces the feeding and labour costs involved in pig production in my facility. We have also noted the significant reduction in fat, resulting in more lean meat production from the pigs,’ says Ms Mwangi.

Ms Mwangi has been contracted to supply her pigs to Farmer’s Choice—a major pork retailer in Kenya. They graded the carcass quality of her pigs as ‘grade one’, especially the eye of the loin, as it has less fat compared with other suppliers. Farmer’s Choice is seeking to develop a partnership model with Ms Mwangi to train other pig farmers on black soldier flies rearing techniques based on her results.

With technical and financial support from INSFEED, Ms Huijbers received a starter pack of cricket seed and started experimenting with crickets. She is now the biggest producer of crickets among the entrepreneurs trained by icipe’s Insects for Food, Feed and Other Uses Programme. Her crickets are primarily grown for human food and not livestock feed.

In 2018, Ms Huijbers looked to expand to other insects for feeds options and approached INSFEED for help.

From her production, Ms Huijbers dries at least 70% of the larvae and packages it for sale as livestock feed. The remaining 30% are raised to adult flies for the continuity of the colony. Her enterprise employs 43 people, 31 of them women, who are all below the age of 30.

Apart from creating a high protein content feed and supplementing farmers’ incomes, black soldier flies can be used to clean up vast quantities of bio-waste such as fruit and vegetable waste from markets, potato peels, beer waste, food waste, and pig manure. These products are readily available, and they are a nuisance to most people in Kenya due to their offensive and unbearable smell.

‘I started scouting for waste from our neighbours—[snack manufacturing company] Tropical Heat. When [supply] was assured, I set out to find more industrial waste at big companies as well as within the single markets,’says Ms Huijbers, who now collects food scraps and leftovers ranging from mango peels, watermelons, and beer waste, locally known as machicha.

When fed organic waste, black soldier flies produce nitrogen-rich frass (insect manure) that can be used as a high-performing fertiliser.

Further studies have revealed that maize grown on plots treated with black soldier fly frass fertiliser generate 29–44% higher net incomes compared to plots amended with commercial organic fertiliser. The team is now exploring the use of frass fertiliser by smallholder farmers in low-income countries and its potential to create affordable revenue generation opportunities.

Over the past six months, and in partnership with Nairobi County, the INSFEED project team has trained over 1,096 farmers (733 men and 363 women) on sustainable ways of producing black soldier flies as feed for their animal and the frass fertiliser for their crops. ‘The project has also provided them with starter kits to set up their household production systems’, says Dr Tanga.

One significant barrier preventing would-be insect agripreneurs from getting involved in the emerging industry has been the lack of supporting policy. Insects are typically not considered domestic animals, requiring farmers to pay expensive annual certification fees and subject to tight restrictions limiting their ability to move and trade insects and insect products.

But in a recent policy breakthrough and following draft proposals being submitted by the INSFEED team, the Kenya Bureau of Standards announced new policies that would enable insect farmers, harvesters and processing industries to ‘sell their products in the local markets and beyond.’

Dr Tanga explained that with the development of the standards, ‘new opportunities have emerged to start the development of the insect value chain to harness the prospects across the entire chain that will allow producers, processors and suppliers, especially youth and women, to earn more income from insect farming.’

With a national system that better supports farmers in producing and harvesting insects, Kenya and its future agripreneurs are ready to take advantage of a new industry.

PrevPrevious
We use cookies on our website to give you the most relevant experience by remembering your preferences and repeat visits. By clicking “Accept”, you consent to the use of ALL the cookies.
Do not sell my personal information.
Cookie SettingsAccept
Manage consent

This website uses cookies to improve your experience while you navigate through the website. Out of these, the cookies that are categorized as necessary are stored on your browser as they are essential for the working of basic functionalities of the website. We also use third-party cookies that help us analyze and understand how you use this website. These cookies will be stored in your browser only with your consent. You also have the option to opt-out of these cookies. But opting out of some of these cookies may affect your browsing experience.
Necessary Always Enabled
Necessary cookies are absolutely essential for the website to function properly. These cookies ensure basic functionalities and security features of the website, anonymously.
Functional
Functional cookies help to perform certain functionalities like sharing the content of the website on social media platforms, collect feedbacks, and other third-party features.
Performance
Performance cookies are used to understand and analyze the key performance indexes of the website which helps in delivering a better user experience for the visitors.
Analytics
Analytical cookies are used to understand how visitors interact with the website. These cookies help provide information on metrics the number of visitors, bounce rate, traffic source, etc.
Advertisement
Advertisement cookies are used to provide visitors with relevant ads and marketing campaigns. These cookies track visitors across websites and collect information to provide customized ads.
Others
Other uncategorized cookies are those that are being analyzed and have not been classified into a category as yet.
SAVE & ACCEPT